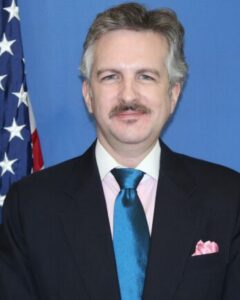 In December 2020, Seth Vaughn assumed the position of Acting Deputy Chief of Mission at the U.S. Embassy in Chad. He arrived in N’Djamena in October 2020 as the Political and Economic Section Chief.

A career foreign service officer since 2000, prior to Chad Seth served in the U.S. Department of State’s Office of Environmental Quality as Multilateral Affairs Division Chief and then Acting Deputy Director. From 2015-2018 he was the Counselor for Environment, Science, Technology, and Health Affairs at the U.S. Mission to the Organization for Economic Cooperation and Development in Paris, France. Seth served at the U.S. Embassy in Bangkok, Thailand and the U.S. Embassy in Kingston, Jamaica.

In addition to various assignments at the Department of State, Seth was detailed to the Office of the U.S. Trade Representative as the Director of the U.S. Generalized System of Preferences (GSP) Program and to the U.S. Senate as the Legislative Aide for Trade Affairs to a Finance Committee member.

Seth was born in Rhode Island and raised in Merrick, New York. Prior to joining the Foreign Service, Seth worked at a commodities exchange in New York City and then as a child support investigator for New York’s Nassau County. He holds a B.A. in History from Brandeis University and a M.A. in Strategic Studies from the U.S. Army War College. He has learned French, Thai, Korean, and Arabic and studied economics at the Department of State’s Foreign Service Institute. He is married and has a daughter.