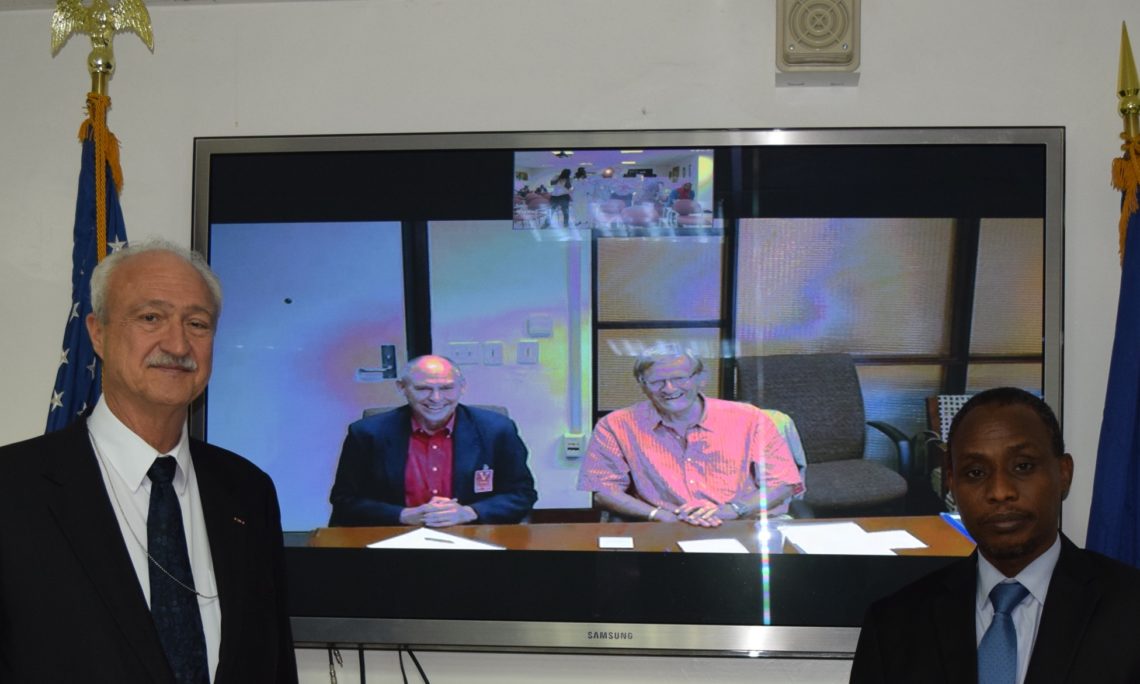 Ambassador James Knight and Chadian Minister of Culture and Tourism Development in N’Djamena with Terry Little (L) and David Coulson (R) from TARA in Nairobi.

Ambassador James Knight and the Chadian Minister of Culture and Tourism Development held a joint press conference on August 4 during which the Ambassador officially announced the selection of Chad as one of the winners of the 2016 Ambassador’s Fund for Cultural Preservation (AFCP).   This is the third time AFCP has funded project in Chad.

Two representatives of the Trust for African Rock Art (TARA) based in Nairobi, Kenya, participated from Embassy Nairobi’s DVC facilities thanks to facilitation by its staff.  In addition to reporters, Ministry of Culture and Tourism Development’s senior staff members, two parliamentarians and the Director General of  the National Museum attended the event.   Questions asked ranged from the impact of this specific project to the general scope of AFCP grants.  The Ambassador, PAO, the Ministry’s Director of Cultural Heritage and both parliamentarians took turns in providing answers and comments on the importance of preserving cultural heritage.

TARA representatives explained the process leading to the approval of the grant and how it will be implemented;  the project will preserve rock art in the mountainous northern regions of Borkou, Ennedi and Tibesti.   AFCP will provide $65,000 to enable TARA to implement the project which will take place in three phases.  On the first survey expedition scheduled for this November, TARA has invited experts in digital reproduction from Factum Arte who will use techniques such as “gigapan photogramatery” in order to record faded imagery.  Through collaboration between the National Museum, TARA, Factum Arte, the AFCP and other partners, the project will survey and document many of the little or unknown rock art sites in order build on the database at the National Museum in N’Djamena and to promote this heritage through an exhibition and other outreach activities.  The TARA team will train and build capacity of the National Museum team to ensure further survey, documentation, data management and conservation of Chad’s rock art.  TARA will also host a representative from Chad’s National Museum at their headquarters in Nairobi to train and learn database management.  Later TARA will help the Museum mount an awareness exhibition in N’Djamena using the database images.  One of the project sites, the Ennedi Massifs, was just recently added as a UNESCO World Heritage Site.