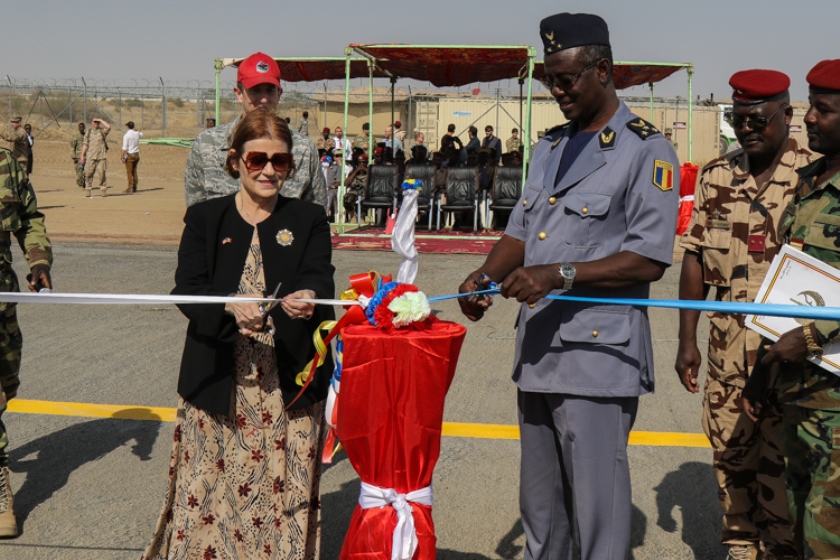 N’Djamena – 11 January 2017:  Preparations for next month’s FLINTLOCK regional  counterterrorism exercise are in their final stages, as representatives from participating nations are currently meeting in N’Djamena to work out the final details for next month’s event.

Today Chadian Air Force Chief of Staff Major General Mahamat Ahmat Fadoul and the Chargee d’Affaires of the United States Embassy in N’Djamena, Ms. Joyce Namde, conducted a ribbon-cutting ceremony for two exercise-related construction sites near the airport in N’Djamena – an additional runway parking ramp and as a small building that will be used as a training facility during the exercise.  This year marked the first time that all FLINTLOCK exercise-related construction projects were completed prior to the start of the exercise.

The Chadian Director of the FLINTLOCK 2017 Exercise, Brigadier General Zakaria Ngobongue, welcomed participants to the dedication, then U.S. Air Force Colonel Andrew Stephan thanked his team and their Chadian partners for constructing the apron and parking, and spoke of how effectively the international partners worked together “by recognizing each other’s strengths, and by building respectful relationships and friendships.”  Ms. Namde expressed her appreciation to the combined team of Chadian officers and American engineers who coordinated every detail of this construction.  She observed the extreme level of detail required to ensure that the runway would be suitable for the exercise: “The runway must hold aircraft weighing more than 75,000 kilograms, resist weather and corrosive fuel which may drip from the aircraft during maintenance, flex when heated and not crack for decades” and that the expanded runway “will enable aircraft to conduct many types of missions here in Chad.”  Ms. Namde also recognized the efforts of the U.S. Navy Seabees who built the operations center, a permanent building that will not only help to train FLINTLOCK 2017 participants, but also will be used by the Chadian Air Force as a training center in the future. During the event’s final speech, MG Fadoul emphasized that these infrastructure projects are “the fruits of the strong cooperation between the United States and Chad, especially in the military domain.”

At the conclusion of the official event, Ms. Namde and MG Fadoul viewed the training facility and the area where the visiting troops will be living during the FLINTLOCK exercise.  The Seabees unit commander, Lieutenant Danica Globokar, narrated the tour of the exercise area and informed the distinguished guests that the operations building is approximately 3,000 square feet in size and cost about $230,000 US Dollars.  She noted that: “the project not only benefitted the Chadian military, but also the local economy, because materials used for construction were procured in Ndjamena.   Over 2,000 soldiers from 24 countries will participate in next month’s regional exercise, including 800 who will be training at various sites in Chad.