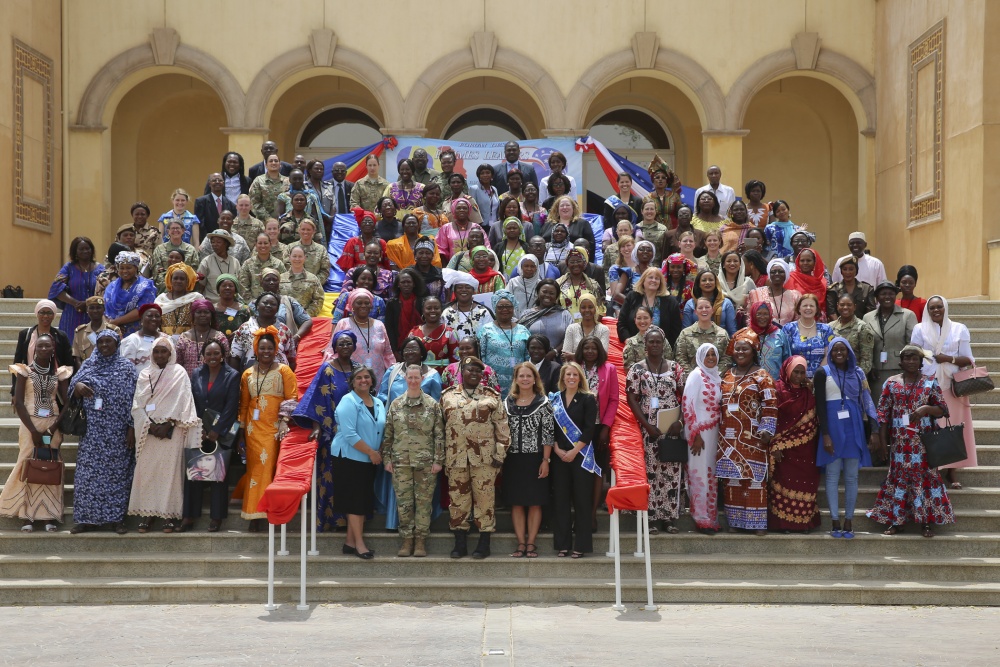 N’DJAMENA, Chad – The room spun with a diverse pattern of clothing, dialects and languages as 120 women and men from every swath of Chad and the U.S. sipped tea—and discussed how to change their world.

“This is important work,” said Ruth Mawjioloum Beko, a local interpreter wearing a shy smile and a bright red dress. “It must be done.”

Held on the eve of International Women’s Day, the Women’s Leadership Forum was hosted by Special Operations Command Africa during Flintlock ’17, Mar. 7, 2017, and facilitated by the U.S. Embassy and Spirit of America. The Chadian-led forum was intended to spur discussion and action about challenges and opportunities facing women.

Flintlock ’17 is the largest special operations exercise in Africa, including more than 20 countries training together to build enduring relationships and increase security and stability.

“Peace and security are key,” Amb. Geeta Pasi, U.S. Ambassador to Chad, said in French to the gathered group before her. “Because women are directly affected by conflict, women must be at the negotiating table for peace-building efforts and post-conflict decision making.”

This is the first time the U.S. military has hosted an event in conjunction with International Women’s Day in Chad.

While the question-and-answer portion with Chadian and U.S. women keynote panelists prompted more than two hours of conversation, it was during group discussions that Chadians delved into challenges and opportunities in their communities.

“Women have to remove the idea of inferiority in their heads to go further,” Chadian Lt Col Bella Adamou, a keynote panelist and a leader within the police force, said through an interpreter. “We always say that we are equal to men, but we have to prove we are equal to men by taking our place, by daring to do what they do. We have to change our mentality in that direction, and that we can have the opportunity to prove ourselves.”

The discussion groups focused on one of three topics previously identified by Chadian women: health, education, and business.

With each group moderated by a local woman leader, the teams spent their time discussing and developing a summary of issues and proposed solutions to present to the entire group at the event’s culmination.

The health group identified several key issues affecting the health sector in Chad, from the need for qualified personnel and the development of community health centers to the lack of awareness about mental health issues. Specifically focusing on how to build capacity in support of women’s health, the Chadian women proposed promoting free health screenings in rural populations, educating women in health concerns, developing pre- and post-natal care centers, and creating a cancer awareness campaign.

The business group discussed the different components of empowering women in both urban and rural areas and addressed cultural and social challenges for women within industry. Specifically, they proposed adopting policies that facilitate women’s access to education and professional training. These policies might include a reduction of taxes on women activities to facilitate competition, and develop women business incubators and a women’s chamber of commerce.

The education group primarily discussed the cause of the low literacy rate amongst Chadian women, and proposed possible solutions to increase it. They identified cultural norms, early marriage, poverty, and lack of awareness as major contributors to low literacy rates. To raise the literacy rate, they proposed two actions: the creation of all girls’ schools to foster a safe environment, and the generation of an education campaign with successful women’s testimonials, highlighting the importance of girls’ education to increase both parental and youth awareness. They also discussed how sustainable mentorship programs could provide guidance to young girls and create a safe platform for knowledge-sharing.

“We do hope by seeing this, the government would propose similar events that will help women to have confidence in themselves, and thus build up society in a positive way,” Kinga Nedege Kaoulouar, who works in the Chadian ministry of commerce, said through an interpreter.
Kinga was one of many women who expressed a desire to effect change in her local community and country, but there was no shortage of cross-cultural, global perspective during the event.

“While we are here today to celebrate and empower the women of Chad– the issue at hand is global,” U.S. Army Col. Katherine Graef, a keynote panelist and SOCAFRICA director of logistics, said. “Dismissing gender equality as a women’s issue leads to the erroneous conclusion that it is a ‘luxury’ issue to address if we have extra time or resources … As a fundamental building block of every culture, gender should inform any comprehensive security strategy– just as history, religion, economics, or ethnicity must.”

For participants like Florence Bikomou, the forum was more than an opportunity to network and discuss: it was the chance to move actionable concepts out of the conference room and into their communities.

“This alone gave me so much peace and joy,” Bikomou said, a Chadian decorator and clothing designer. “I have hope for the future.”