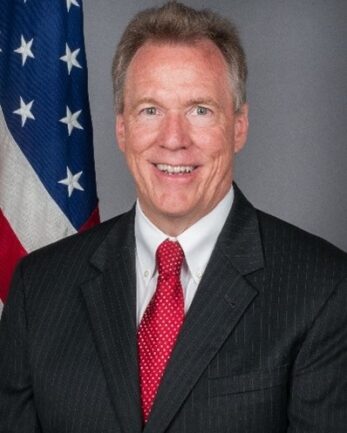 Ambassador David Gilmour has been Charge d’Affaires, a.i. of the U.S. Embassy in N’Djamena since December 2020.  Prior to that, he was the Director of East African Affairs at the U.S. Department of State.  He served as the United States Ambassador to Togo from 2015 to 2019. Ambassador Gilmour was Deputy Assistant Secretary for Central Africa from 2013 to 2015, and Director of Public Diplomacy for Africa from 2011 to 2013.  He was Deputy Chief of Mission at the U.S. Embassy in Panama and Deputy Chief of Mission at the U.S. Embassy in Malawi.  Ambassador Gilmour’s earlier assignments include posts in Switzerland, Australia, Cameroon, Costa Rica, Senegal, and South Africa.  He holds a BA from Saginaw Valley State University and an MA from the University of Texas at Austin.