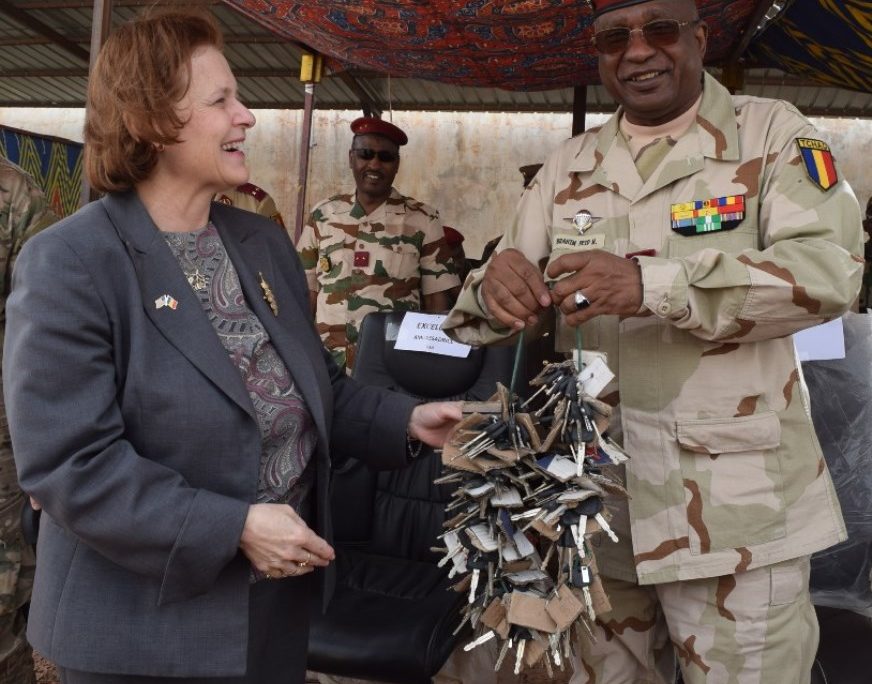 N’Djamena, February 2, 2017:   At a ceremony in Amsinéné at the headquarters of the Chadian Special Anti-Terrorism Group (SATG) the United States transferred 86 new vehicles to these Chadian Special Forces.   U.S. Embassy Chargeé d’Affaires Joyce Namde and Chadian Chief of Defense Lieutenant General Brahim Seid Mahamat conducted the formal vehicle handover ceremony. The vehicles are intended to provide transportation for two counter-terrorism companies and one logistics company.  These trucks will increase the counter-terrorism units’ ability to patrol Chad’s borders with Libya and protect against the threat of smuggled weapons and explosives.  The logistics company received fuel and water trucks and other transportation vehicles that will improve the SATG’s ability to re-supply the counter-terrorism companies.

Ms. Namde noted the strong relationship that the U.S. Special Forces have had with SATG over the past ten years.  She recognized Chad’s “strong dedication” to the fight against extremists and the “bravery and expertise” of Chadian troops on the battlefield, and expressed hope that the new vehicles will improve Chad’s ability to conduct counter-terrorism missions. At the conclusion of the ceremony, Ms. Namde symbolically presented the keys of the vehicles to General Mahamat.

The new SATG vehicles are just one example of the strong partnership between the militaries of Chad and the United States.  Next week Chad will receive its final shipment of Toyota Light Armored Vehicles for Counter Boko Haram Operations, bringing the total to 60. The United States will also provide uniforms and individual food rations to Chad’s military in advance of the upcoming FLINTLOCK exercise.